The Kasasiro boys who were busy in the preseason with friendly games around the continent plus notable siginings which saw the return of midfielder Allan Okello to the team.

KCCA FC will miss services of defenders  Peter Magambo and Herbert Achai who have been sidelined due to injury. Magambo a flamboyant  defender whom KCCA depended on a lot during the 2020/2021 season is recovering from a knee injury sustained during pre-season that will keep him out for the most part of the first round, less was seen of him last season after he spent much of it injured. He has already embarked on rehabilitation and should be up for consideration in the second round of the season. 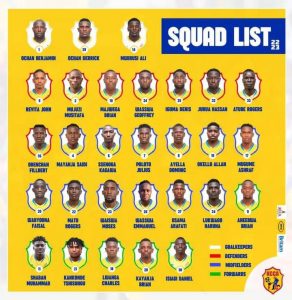 Allan Okello takes over the famous shirt 10 which was previously donned by Yassar Mugerwa. Okello donned shirt 25 during his first stint at KCCA FC.

Shaban Muhammad will don shirt 11 which was previously donned by Samson Kigozi. Shaban donned shirt 21 during his first stint at KCCA FC.

Teenager Faisal Wabyoona will don shirt 20 which was previously donned by Davis Kasirye.

Moses Waiswa Ndhondhi will don shirt 23 which was previously donned by Bukenya Joseph.

Daniel Isiagi will don shirt 30 which was previously donned by Juma Ibrahim.

Rogers Atube and Haruna Lukwago will don shirts 33 and 34 respectively.

Teenagers Mwanje Elvis Eddy and Enyou Allan have been loaned to Elite Flacons in the United Arab Emirates while Juma Ibrahim has been loaned to C.D Leganes in Spain.