Vipers will look to address their scoring problems when they welcome UPDF to St. Mary’s Stadium, Kitende for a Startimes Uganda Premier League clash on Friday.

Following their slim victory over Arua Hills on Tuesday, head coach Oliviera Roberto insisted that his team sets out to play attacking football and that the aim is to have numbers in the final third. 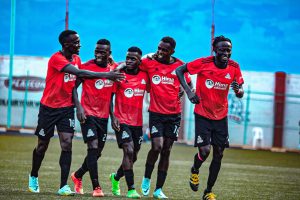 Robertino finds delight in his side’s style of play, but the defending Champions who scored 69 goals last season are finding goals hard to come by this campaign.

By the end of match day six last term, the goal scoring charts for Vipers read 15. This term however, the side has managed just 6 in as many games.

They have managed to score more than one goal only on one occasion in the league this season. And it was against Maroons.

The venoms must surely feel the void left behind by last season’s league top scorer Ceasar Manzoki, but it is something they need to address.

Tomorrow’s game presents them with an opportunity to address just that as they take on a UPDF side they thumped 7-2 the last time it visited.

Away from Kitende, Wakiso Giants play host to Gaddafi looking to dislodge Bul from the top of the table.

John Luyinda’s team have accumulated 14 points thus far, that’s level with the Jinja side, but trail the side on goal difference.

Victory on Friday will see them go outright top.

Gaddafi meanwhile will be looking to make it three wins in three following their successive victories against Busoga United and Bright Stars.

After a disappointing start, Wasswa Bbosa’s team seem to have found their mojo. They will hope to continue with their good form, but they head to Wakisha well away that their hosts have won four in five.

Gaddafi sit 9th ahead of the fixture.