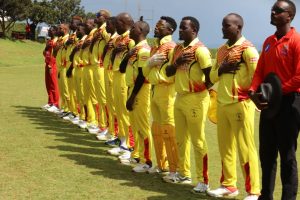 certain section of cricket fans may have reservations about the cricket played this year, but sometime in the future, they will look back and say ‘2022 wasn’t a horrible year after all.’

Despite the cricket crane’s failure to attain the much-desired ODI status, great strides have been made in this gentleman’s game.

Uganda Cricket Association’s calendar commenced with the global competition, the ICC U-19 Cricket World Cup in West Indies which was held between Jan 14 and Feb 5. It was Uganda’s third appearance at the youth World Cup and the tournament was one that announced a pool of talented youngsters on the international stage.

Team captain Pascal Murungi, Cyrus Kakuru, Joseph Baguma, Ronald Lutaya and Juma Miyaji who was named the fifth-best bowler at the tournament were some of the youngsters that graced the global showpiece.

They have gone ahead to break into the senior team, with Miyaji becoming a mainstay and one of the stars at the national team.

Meanwhile, away from the oval, key decisions were being made in the boardrooms. Uganda Cricket Association’s long-serving chief executive Officer Martin Ondeko completed his innings on the 31st of march making way for new CEO Alan Mugume who was appointed on 1st of July.

Back to the oval, the Association sent the cricket cranes to Namibia for a 3-match T20 series and two 50 Overs games in April. Uganda lost the series 2-1, but drew 1-1 against the ODI nation in the 50 Over format.

The Victoria Pearls also went for a 5-match series in the same South African nation the same month, but the tour turned sour as Uganda lost the series 5-0.

However, amends were made in the tour that followed, the Nepal Series in May. Uganda edged their hosts 3-2, with Janet Mbabazi scooping the player of the series award after scoring most runs- 103.

In June as the Victoria Pearls were headed to Rwanda for the annual Kwibuka tournament, the cricket cranes were preparing for the second round of the Challenge League B that was hosted here in Kampala..

The Challenge League B was a pathway to next year’s 50 Over World Cup and Uganda were trying to achieve just that, and attain the most sought-after ODI status as well.

Uganda did fairly well in Kampala, winning three out of five games which was enough to see them maintain their spot at the top of the table, but their dreams were crushed in the final round of the tournament that was hosted in Jersey in August.

Uganda finished second behind Jersey. Disappointing as only the top team was progressing to the next round.

Another national team, the U19 girls’ team took a shot at a World Cup qualification but came short after finishing 4th at the Africa Qualifiers that were held in Botswana in early September.

With all hope nearly gone, the cricket cranes delivered the goods in mid-September. Laurance Mahatlane’s team beat Tanzania by 3 wickets in the finals of the Africa T20 Cup that was held in Benoni, South Africa to become the inaugural champions of the event.

Riazat Ali Shah ran the show in this one. Not only did he win the player of the match in the final game, but the all-rounder also finished the tournament as the player with the most runs- 222.

That victory was a feat that surely will be remembered in the history books of Ugandan cricket.

But success this year did not end there. The year was capped with two events that had both the senior national teams emerge victors.

After that disappointment at the Kwibuka, the Victoria Pearls reminded their regional rivals who the real top dog is by winning the Inaugural Kenya Women’s International T20 Quadrangular after beating Kenya by 6 wickets in the final. Mbabazi once again outshone everyone as she bagged the tournament MVP award.

For the cricket cranes, it was a routine victory as they lost just one game en route becoming the inaugural champions of the East Africa Tri-Nation T20 Cup that was hosted in Kigali, Rwanda.

The tournament saw three youngsters Joseph Baguma, Cyrus Kakuru, and Ronald Lutaya earn their national team debuts, but most importantly, opening batter Simon Ssesazi became the first Ugandan to score a century in a T20I game, a feat he achieved with just 58 balls.

A perfect climax to a year that has given us thrilling action, cricket, has definitely not disappointed.