by Ritah Tugumisirize
in Basketball
0 0
0

After being forced to a halt by the unsparing COVID 19 pandemic, the national basketball league returned in march 2022 to the relief of tens of thousands of its faithful.

Without two-time champion warriors who went extinct and the old folks from Falcons just returning from the relegation bin, the seven-time winner’s city oilers looked destined for an easy go at a record-extending 8th consecutive crown.

With the core of Mandy Juruni’s old guard that includes Jimmy Enabu, Ben Komakech and Tony Drileba still intact and the addition of Moses Maker, Nigerian giant Francis Azolibe and Luak Ruai, on paper, it looked destined to be a walk in the pack, but that was far from it.

UCU canons and Power were clearly off the pace but the faint hope of removing the dictator was in the hands of a newcomer, Namuwongo Blazers who had proved to be money bags given their recruitment. With players like Paul ‘McGyver’ Odong, Said Amiisi and David Dikong Deng, indeed this was the team to watch and they did not disappoint. 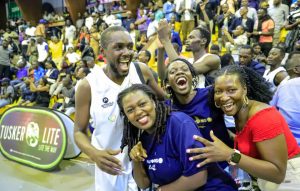 For the first time in Ugandan basketball history, games were to be broadcasted live on the new home of Ugandan Sport, NBS Sport. Fate couldn’t have chosen a better match to tip off this historical campaign, Namuwongo Blazers VS the Mighty City Oilers it was in the Men’s division. The newbies hang on to get one over the oilers.

First forward to September, battle lines had been drawn and fate had again handed the Nam Blazers a chance against the giants, this time, in a title-deciding best-of-seven series. This was always going to be a cracker.

In the women’s division, Flavia Oketcho’s JKL lady Dolphins matched smoothly to the final to set up a date with seven-time champions UCU Lady Canons.

The build-up to this final was as epic as it came. In the Ghetto of Namuwongo, locals were excited, as their village had become the talk of the nation for the right reason. One Artiste even recorded an anthem for the team.

After playing ping pong and sharing the first six games, both men and women finals headed for the decisive game seven which attracted a record crowd at the Lugogo indoor Arena, while in Namuwongo, some paid to watch games on Television.

With drones flying over the facility and spectators’ toes nearly kissing the base and sidelines of the court, the atmosphere couldn’t have been any better. 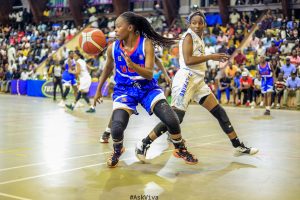 In the men’s division, the experienced oilers still held on despite the hostile crowd, to win 66-64 and lift their 8th consecutive crown. This was to many the best National Basketball League final in ages.

The eight-time champions didn’t not only register a record at home but also on the continent.

For the first time, Uganda will have a representative at the elite Basketball Africa league -BAL, where they will rub shoulders with the crème de la crème of African Basketball. This after they finished 3RD in this month’s Bal Qualifiers in South Africa despite losing to Cape town tigers 75-79 in the semi-final.

The 2023 Basketball Africa League will be held next year starting March 11 at the BK Arena in Kigali.

The Uganda female team the gazelles, beat Tanzania 63-43 to qualify for the 2022 FIBA U18 Zone V Afro basket tournament that was held in Madagascar where they finished fifth.

The icing to the success story of basketball this year is all games were broadcast on the home of Sport, NBS Sport for the hundreds of fans who couldn’t make it to the Arena.

The Sport was faced with challenges too.

On a rather sad note, Uganda lost the right to host the Basketball Africa league qualifiers due to the EBOLA outbreak, the men’s national team the silverbacks failed to qualify for the FIBA world cup, among others, but regardless 2022 has been a year to celebrate for the Basketball faithful’s and let us DUNK INTO THE NEW YEAR hoping for much better in basketball.